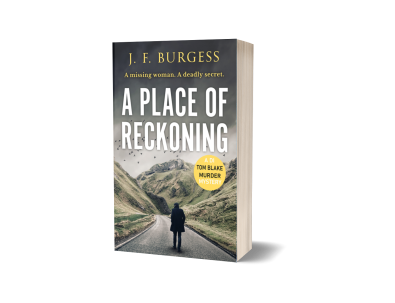 Something a little different for you today 🙂

I have been lucky enough to snag a spot of the Blog Tour for A Place of Reckoning by J F Burgess which is organised by Love Books Tours and I am coming at you with a short excerpt of the book!

He’s sure it was the brutally dangerous ex bare-knuckle fighter, Patrick Dunne. Patrick promised to avenge his son who died in a tragic accident in one of Charles’ factories. It’s an open and shut case…

…until a headless body turns up in a remote Peak District pool, its back tattooed with a cryptic Tarot card. As Detective Inspector Tom Blake and FBI profiler Lucy Stryker dig into the mystery, they unearth long-buried secrets about an historic conspiracy and a clandestine cult. But with a sadistic killer on the loose, and everyone hiding things, it’s not just the victim’s life that hangs in the balance. Will anyone get out alive?

Because when the powerful are pointing the finger, you’d better watch your back…

The light was fading and rain lashed down in front of the Astra’s headlights as Detective Inspector Tom Blake and Detective Sergeant John Murphy came to a standstill at the top of a long, litter-strewn alleyway that ran behind a row of boarded-up terraced houses on Wells Street, Middleport. The once-thriving industrial area was pencilled in for regeneration by the council, but money from central government hadn’t materialised. Like most of old Stoke-on-Trent from the turn of the nineteenth century, factories and workers’ houses nearby were in a poor state of repair. Years of neglect had seen to that. The two detectives felt sorry for those elderly residents who’d clung to the glories of a past of full employment and thriving community. Now they lived amid empty terraced houses and an influx of East Europeans looking for unskilled work.

‘You reckon Denzel Glennie is back at it, then?’ DI Blake asked his DS, John Murphy.

‘Sex cases like him don’t change, despite what the shrinks say. They can’t be healed. He’s got a taste for knocking prostitutes around. He gets off on it. His stash of Viagra was in double figures last time we arrested him,’ Murphy said.

‘The office manager uses it.’

‘Says he needs them to keep pace with all these MILFs he’s dating. Says they’re hornier than any under-twenty-fives he’s been with,’ Blake said.

‘Jesus! Evermore likely his missus won’t take him back. ’

‘Anyway, this is Glennie’s stomping ground. There’ve been several reports of dealing and soliciting in this area over the last two weeks. The old lady in number sixty-eight there is petrified. She’s told PC Haynes she doesn’t go out after dark. Seeing Glennie with his pants down was the last straw for her.’

‘I don’t blame her, look at the state of this place.’ DS Murphy flicked on the wipers to wash away another deluge from the windscreen.

‘Hopefully, this bloody lot will ease up. Don’t fancy getting soaked. Which property is the dealing going on at?’

‘See that brown wheelie bin?’ Murphy pointed to the stranded bin leaning against a wall. ‘The working girls are using a row of three terraced in the middle there. They’re most likely knocked through. Like those cannabis farms the Drug Squad raided in Longton last month.’

A Place of Reckoning is the second novel in the Detective Tom Blake series and is available now at an amazing price for Kindle!

You can find the first novel here.

And A Place of Reckoning here.

I can’t wait to hear what you guys think 😉

Thank you Love Books Tours for letting me be a part of the tour!