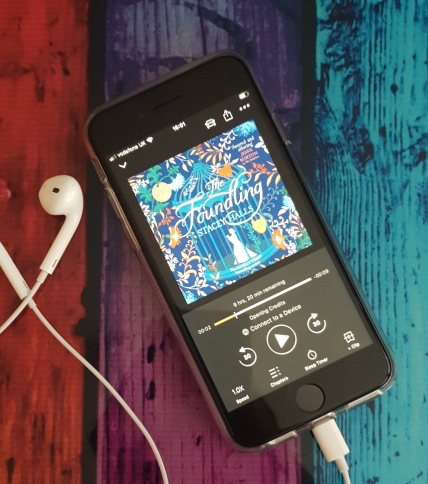 Six years after leaving her illegitimate daughter Clara at London’s Foundling Hospital, Bess Bright returns to reclaim the child she has never known. Dreading the worst – that Clara has died in care – the last thing she expects to hear is that her daughter has already been reclaimed – by her. Her life is turned upside down as she tries to find out who has taken her little girl – and why. Less than a mile from Bess’ lodgings in the city, in a quiet, gloomy townhouse on the edge of London, a young widow has not left the house in a decade. When her close friend – an ambitious young doctor at the Foundling Hospital – persuades her to hire a nursemaid for her daughter, she is hesitant to welcome someone new into her home and her life. But her past is threatening to catch up with her and tear her carefully constructed world apart.

Last week I took part in a listenalong of The Foundling which was organised by Tandem Collective UK (see Instagram for links etc). I sourced my own copy of the novel (Thanks, Audible) and Tandem sent me several prompts which told me when to pause the playback and gave me a question or two to answer which I then posted to my Instagram stories.

Now, although I have had Audible for around a year, I have to confess I don’t finish a lot of audiobooks, they take me A LONG TIME so I have an excess of books to listen to right now on there. I religiously listen to Stephen Fry read Harry Potter most nights; I put the timer on for 10-15 minutes and usually hear 2-3 minutes before I’m asleep which means I’m always rewinding and in all honesty, I started with The Philosopher’s Stone last July and I am currently halfway through The Order of the Phoenix (that’s how long it’s taking).

So when Tandem advertised doing this readalong I didn’t have the highest of hopes of finishing the book but I also really wanted to read this book after I read the first two chapters a few months ago. I haven’t read The Familiars but I have it and I had heard really good things about it, so I signed up for this one.

And I am so glad I did! I couldn’t stop listening to it. On day one I listened to 4 hours straight while I did some crafts I’ve been putting off which I loved. I felt so much better afterwards, I had achieved something on a weekend (what is a weekend right now?). Now, more than ever I know it’s super important to separate work and play since I’m doing everything in one room so to be able to switch off and actually push myself to start something was a big step and listening to this really was a godsend.

I know that this could have happened with any audiobook. Why was this audiobook important? Well to start with, the narrators are fantastic; I honestly cannot say this enough. The book is told from the point of view of two very different women and the ladies recording their voices were spot on. I couldn’t have felt more involved in the novel if I tried, I felt like the characters were talking to me (I know that’s the point). In other audiobooks I’ve tried, I often find the narrator distracting and quite distanced. I mean, it’s an audiobook –the narrator is key!

In terms of storyline, it moved at a reasonable pace but I have to say I do think I feel this way purely because of the narrators. If I was reading this as a physical novel I’m not sure I would have rated it so highly. The characters are intriguing and considering I’m not usually a fan of Historical Fiction I did want to find out how the novel would be concluded but there isn’t a great deal of dialogue. The narrative is heavily made up of the women’s thoughts and feelings and not conversations which again, is probably why this worked so well as an audiobook.

I would definitely recommend this novel, in physical and audio format. The conclusion was satisfying but not necessarily exciting, if I had to sum it up I would say it was ‘tidy’. There were some interesting themes running throughout, relationships and mental health played a huge part in how the women had experienced life which led to the choices they had made and how their chapters were communicated. I did feel a connection with them, I did understand why they felt the way they did and why they did what they did. The novel makes you play devil’s advocate; putting you in the middle so it’s hard to take sides which was really interesting. I didn’t have a favourite necessarily, I think I would have been happy with any outcome in this book.

So, thanks Tandem for helping me fall a little in love with audiobooks, I think my Audible membership might be getting a little bit more use from now on.