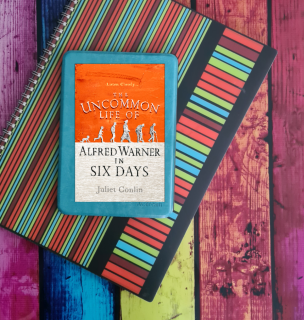 Today is my stop on the Book Tour for this wonderful novel! Thanks so much to Love Books Group for having me along again, after reading Sisters of Berlin I couldn’t not sign up for The Uncommon Life of Alfred Warner in Six Days and I was NOT disappointed!

Approaching 80, frail and alone, a remarkable man makes the journey from his sheltered home in England to Berlin to meet his granddaughter. He has six days left to live and must relate his life story before he dies…

His life has been rich and full. He has witnessed first-hand the rise of the Nazis, experienced heartrending family tragedy, fought in the German army, been interred in a POW camp in Scotland and faced violent persecution in peacetime Britain. But he has also touched many lives, fallen deeply in love, raised a family and survived triumphantly at the limits of human endurance. He carries within him an astonishing family secret that he must share before he dies…a story that will mean someone else s salvation.

Welcome to the moving, heart-warming and uncommon life of Alfred Warner.

Ahhh as I said above after reading Sisters of Berlin (also with Love Books Group) when I saw the offer to read The Uncommon Life of Alfred Warner in Six Days also by Juliet Conlin I couldn’t say no and I have to say I think I may have enjoyed it even more!

While the story starts off slow and it took me a while to get to grips with the points of view, once I got to 20% I was hooked and couldn’t put it down! This story was so lovely. Alfred shot straight to my heart with his story from growing up in Germany, his childhood torn apart when his parents passed away leaving him orphaned in Berlin; to being conscripted in the war, living in the UK and then heading back to Berlin as an old man I just wanted to know everything about his story.

The story introduces Alfred as he has traveled to Berlin to meet his grand-daughter. When she doesn’t meet him at the station as promised – Alfred meets Julia, who ends up listening to Alfred’s story over six days. Between the chapters telling Alfred’s story, we also get chapters focusing on Julia and on Brynja. Julia, who almost takes the place of the reader – learning Alfred’s story and dealing with her own circumstances whilst becoming the bridge between him and his grand-daughter. Brynja also has some chapters focusing on herself, but to me they were confusing and kind of complicated (they are supposed to be) which is what took me a while to get into contact with when I started reading.

The words ‘listen closely’ are written on the cover of this novel and they couldn’t be more apt for this narrative. In part they relate to the story that Alfred needs Julia to hear but they also relate to the voices which Alfred hears of three women. He is told as a child that the ability is passed down in his family. The voices are a character themselves and their words intercept seamlessly into the narrative which works to more closely enfold the reader into the tale Alfred is telling.

Juliet Conlin has fast become as author I need to get more of! I’m going to be hnting down all of her novels! I’ll let you know how it goes 🙂 The Uncommon Life of Alfred Warner is heartbreaking and heartwarming all in one and is actually on Kindle Unlimited right now and also available in paperback and I urge you all to get yourselves a copy now so you can experience this special story first-hand.

2 thoughts on “Book Tour! The Uncommon Life of Alfred Warner in Six Days by Juliet Conlin”