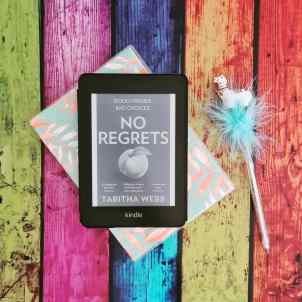 Today is my stop on the tour for No Regrets by Tabitha Webb! Thanks to HQ for sending me a digital review copy so I could take part!

Best friends Stella, Ana and Dixie have always lived life to the full. But now they’re approaching their forties, reality is starting to kill the mood…

Stella loves her children, but misses her glittering career. Plus she can’t even remember the last time she had sex.

Ana is trying for a baby with her partner Rex. So why can’t she stop thinking about the one that got away?

Dixie is the wildest of them all. A Tinder addict who’ll never settle down. But has she accidentally found Mr Right…?

It’s time for the friends to shake things up and start having some fun. Because you only regret the things you don’t do, right?

While I read some chick lit novels, I felt this one was a little outside my expertise. It’s a sassy interpretation of women going through different stages of their lives even though they are the same age. One a  married mother, one wanting to be a mother and one who has no inclination of settling down.

Maybe, but Tabitha Webb approaches each of these women’s lives with an open mind, they come across situations which, although I personally saw them as unnecessary, they lent some humour and life-lessons for the reader.

My favourite thing about the narrative was how equally each woman was followed, I didn’t feel like I knew one better than the other but I guess the downside of this is that you don’t fully connect with the characters – this could possibly be my age too! I’m early thirties so the idea that getting to forty is some kind of dead-end isn’t something I can relate too! Give me a few years and I might tell you something different!

Either way, I found this a light-hearted and easy to read book which gave me some much needed escapism. It’s is recommended for lovers of Bridget Jones, Sex & the City etc which I would definitely agree with! The friendship shown in the narrative is funny, with the interactions being very easy-going and familiar which gives a nice rapport between characters. I think I would have liked to have gotten more information from some of the male view points to give a more rounded narrative.

The book is out now on kindle and you can get it from Amazon here! Paperback release is due 23rd July!