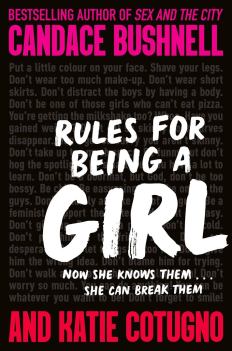 Don’t be easy. Don’t give it up. Don’t be a prude. Don’t be cold. Don’t put him in the friendzone. Don’t act desperate. Don’t let things go too far. Don’t give him the wrong idea. Don’t blame him for trying. Don’t walk alone at night. But calm down! Don’t worry so much. Smile!

Marin is a smart, driven, popular girl – she’s headed for Brown when she graduates and has a brilliant career as a journalist ahead of her. Especially in the eyes of English teacher Mr Beckett. He spends a lot of time around Marin, and she thinks it’s harmless . . . until he kisses her.

No one believes Marin when she tells them what happened, so she does the only thing she can: she writes an article called ‘Rules for Being a Girl’ for the school paper to point out the misogyny and sexism that girls face every day. As things heat up at school and in her personal life, Marin must figure out how to take back the power and rewrite her own rules.

I was sent this novel to review from Netgalley.

As an adult, this book didn’t make the best impression on me I’m afraid. Written by two authors (although I have no knowledge of Katie Cotugno) and two female authors at that, I expected the subject matter to be handled with a little more tact than it was. I know that I am not this book’s target audience but from a Contemporary Young Adult novel I was really disappointed.

Marin as a main character is perfect, she is what you expect – kind, smart and independent as a reader I was firmly on her side of the battle from the start. The teacher involved, Bex (don’t even get me started) is awful and cringey from the get go and Marin’s best friend is pretty horrible and so is her boyfriend. I’m not quite sure what Marin did to warrant having such nasty people in her life! The parents of a few kids are introduced too however and they came across pretty well, being supportive and diverse.

Despite this, I found the narrative to be too simple. The book sits at around 300 pages and took me between 2.5 – 3 hours to read. For such a heavy subject matter, I would have wanted a bit more delving in to the relationships of the novel to get me more involved and emotionally connected. I feel like it skims the surface just to pass on its main message but doesn’t really hit the mark. On every page I was struggling not to roll my eyes at some of the obvious plot points that are supposed to be hints but instead end up being glaringly obvious but as I said initially, I read this book as an adult, not the young adult it was intended for. I would like to think, in a younger mind that girls don’t need this message spoon-feeding to them but I could be wrong.

All the way through this novel I thought my rating would be a 2 but I raised it to 3 partly because I’m not the target audience and partly because, despite its flaws, it was a quick read for me and it tied itself up quite nicely in the end.